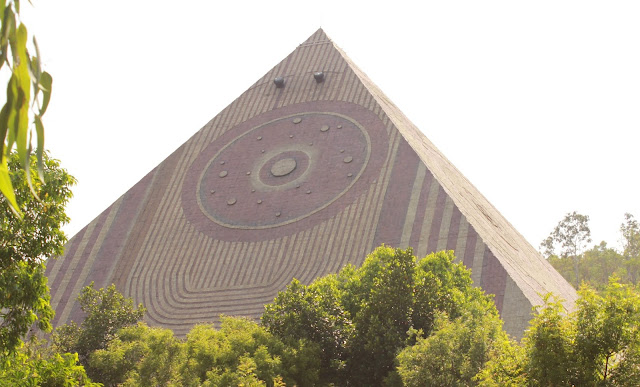 Meditation needs peace and silence. When you can do meditation at home, but if you want to do it any special place, then Pyramid Valley is for you. Even the place is worth to visit if you are not going for meditation.

Pyramid Valley situated near Kanakapura Road. It is 43 from Bangalore city center.

We started from Marathahalli around 11 am. The route I have taken was Marathahalli - Silk Board - Hosur Road - Nice Road - Kanakapura Road - Pyramid Valley. We reached the place by 12.30 pm.

The parking place was just after entering the premises. It was open parking and they charged 20 rupees. After parking the car we went to the information center which was near to parking. We got an overview of the area and reached near to Pyramid. By the time it was lunch time and we directly went to the restaurant. It had different types of veg dishes like polao, dosa, meals etc and there was a juice center. 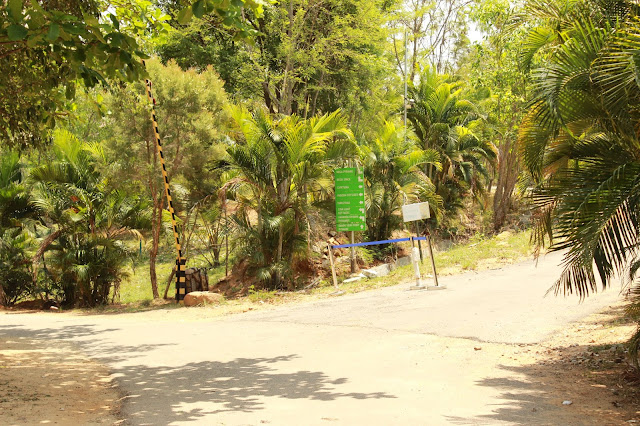 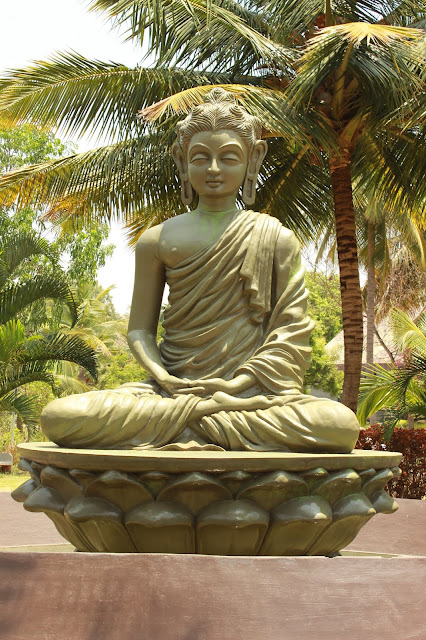 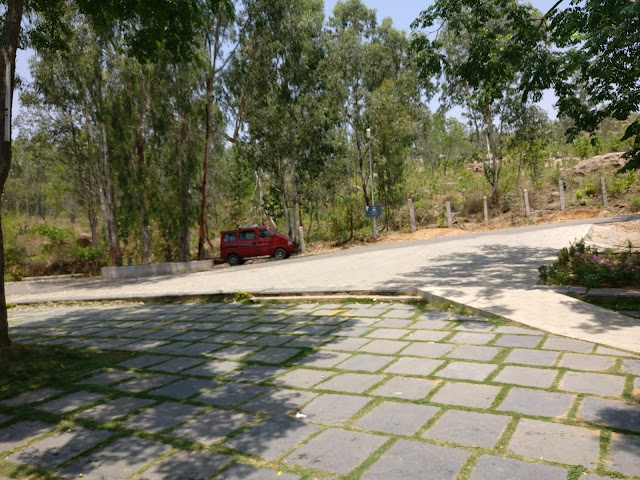 The restaurant is beside a very beautiful garden with artificial waterfall. After the lunch, we went there, have spent sometime and then went near to Pyramid. 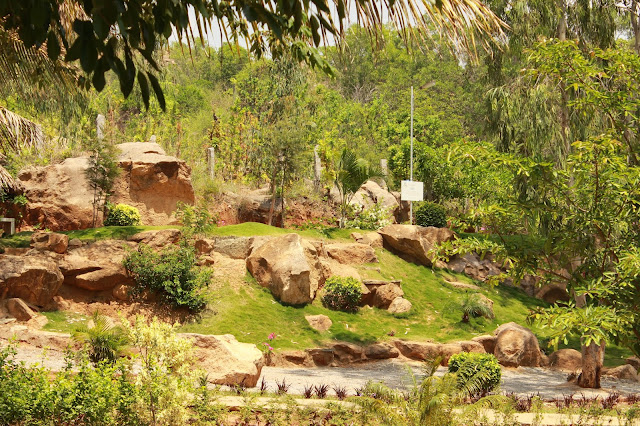 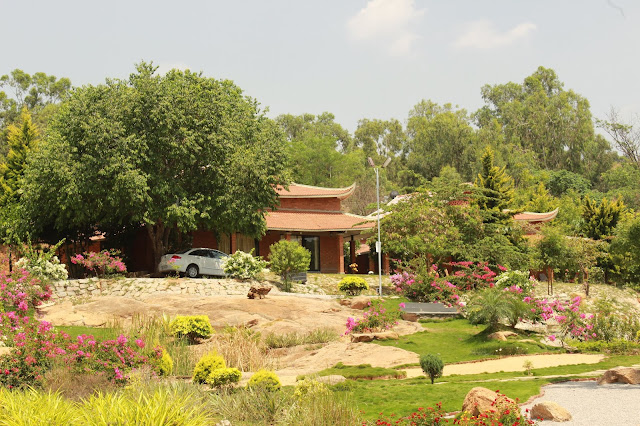 It was a big lawn with many trees in front of the Pyramid and I saw many families are sitting there. We also found a place to sit. My son was enjoying a lot the place and he was busy playing. I saw many other small kids nearby. There were some notorious couples, however security was very watchful and they asked the couples to leave the area. 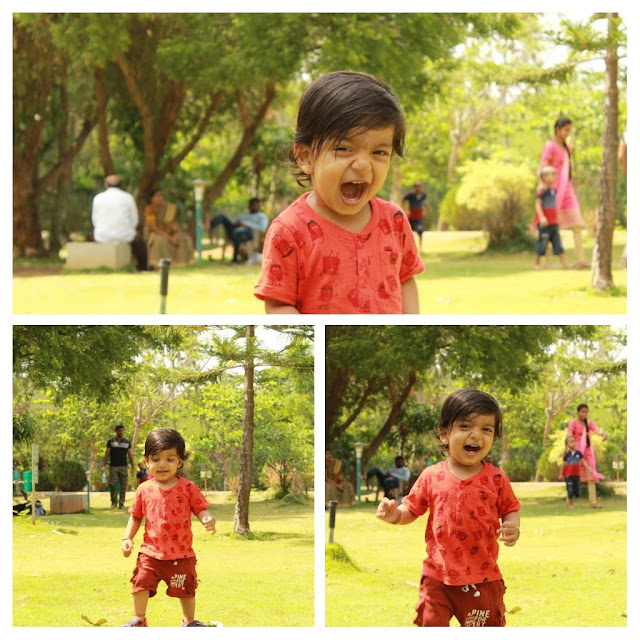 Children below 6 years are not allowed inside the Pyramid to maintain the silence. So we entered Pyramid in group. Inside the Pyramid it's an very big open space and few people are sitting there. It was pin drop silent over there. In the center of the Pyramid there is a small tower and you can go there to do meditation as well. However at a time a limited people can go there and if you go there you need to spend a minimum time over there. We climbed the tower, spent some time and then came back. 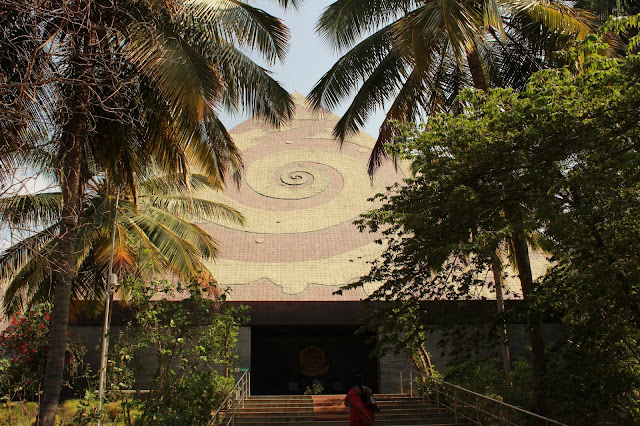 After coming out from the Pyramid we roam around the place. It has a very small bridge which looks very good. We again went to the garden, took some photos. 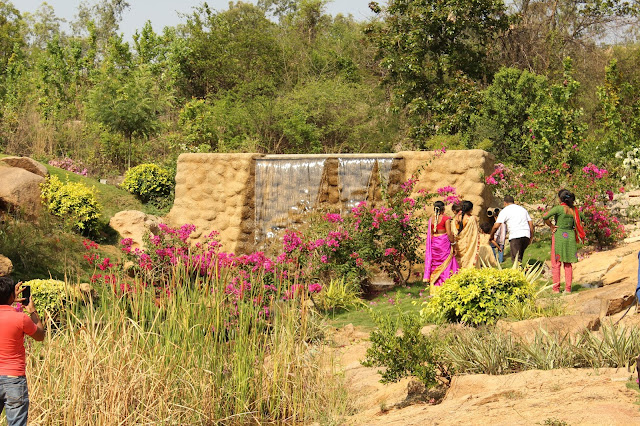 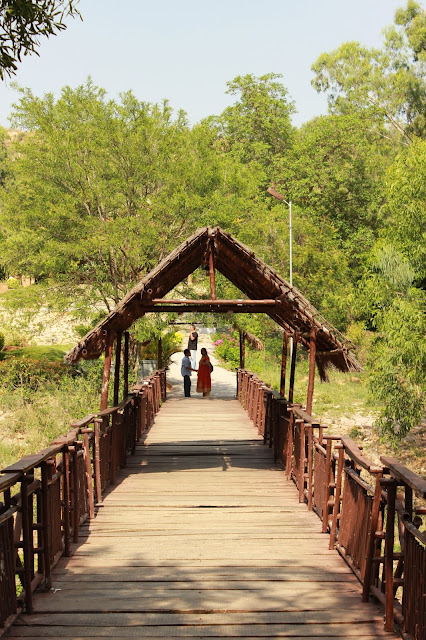 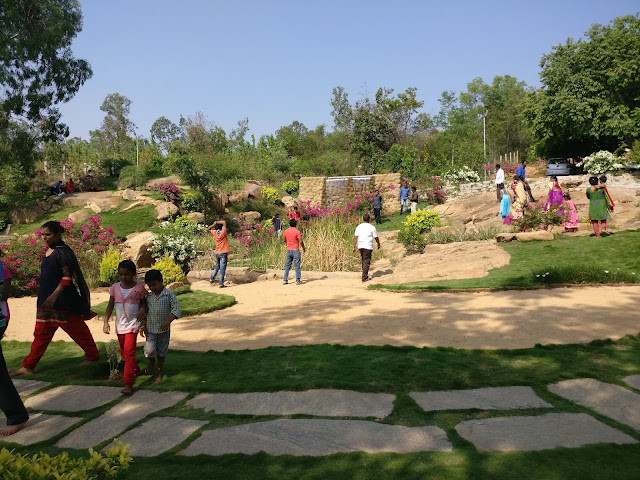 We were done for the day and moved towards parking place and started for home.

The place is good for both meditation and for half day outing. You can plan Pyramid Valley and Sri Sri Ravi Shankar Ashram in the same day.


Happy Travelling!!
Please follow me on Twitter/Facebook/Tripoto/My Travel Website to get latest update on my travel stories. 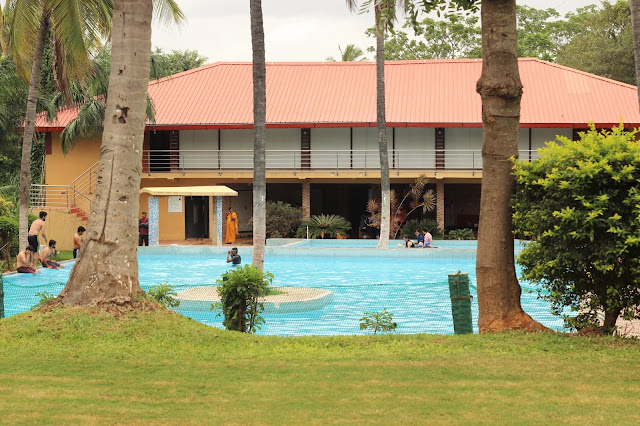 Bangalore is full of resorts for day outing, resorts are of varieties of package, various activities. You can find resort with very cheaper package as well you will find premier resorts with high price package. However if you look for a budget resort with good activities, it is sometimes very difficult to find one and a wrong decision to choose the resort can spoil your outing, specially if you are with family. I was planning for a day outing with my family and relatives on a weekend. I have already visited many resorts in Bangalore and with all kind of experience I was careful to select a good budget resort and I found Elim Resorts. I have gone through Google reviews, photos and their website and it looked good and booked for the day outing. Elim Resort is located near Kanakpura Road, 37 km from Bangalore, precisely 47 km from Marathahalli. It has different day package like Lunch - Hi tea, Breakfast- Lunch - Hi tea, Breakfast - Lunch - Hi Tea - Dinner. They also have ni 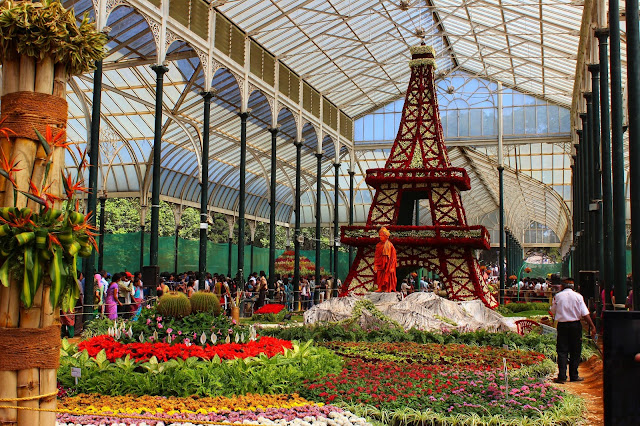 There is a myth and I have heard many people talking about that, there is nothing much to see in Bangalore except the shopping malls. This is not true at all. Bangalore has so many places to explore in it or very nearby and one cannot complete visiting all the places even in 3 to 4 days. Here is my list of few of such places. I have visited almost all these places and will cover the ones which I am yet to visit. Bannerghatta Zoo & Safari Distance from Majestic: 24.7 km Google Map Location: https://goo.gl/maps/fR86TPTTX3Td8HqRA Let me start with my favorite, Bannerghatta Zoo and Safari. Though the zoo is small, however the safari is something you should experience there. In the zoo there few animals including tiger, crocodiles, emu and some other birds. But the main attraction is the safari. It went through different animal’s territory starts with dear, bison, elephant, bear, lion and at the end tiger. You can see the animals very closed to your ve 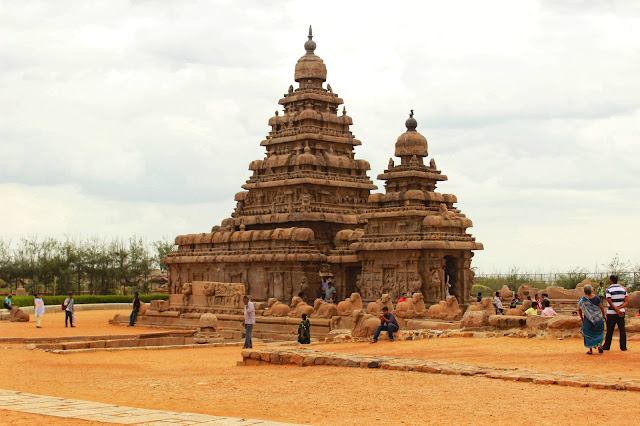 Mahabalipuram - The Ancient Beach of India

Tamil Nadu is very rich in history. There are several famous places beside Bay Of Bengal throughout Tamil Nadu. Mahabalipuram is one of those places which is a historic place with awesome sea beaches and a must visit places for anyone who loves to travel. It is very popular place in India where tourists come form all part of India and from other countries. Recently in 2019 the meeting between our PM Mr. Narendra Modi and Chinese President Mr. Xi Jinping organized in Mahabalipuram. Mahabalipuram is located in Chengalpattu district of Tamil Nadu. It is known for the UNESCO World Heritage Site of 7th- and 8th-century Hindu Group of Monuments. This is also know as Mamallapuram . Mahabalipuram was one of two port cities within the Pallava kingdom during  7th century. The town was named after Pallava king Narasimhavarman who was known as Mahamalla. It is a very beautiful place with so many tourist attractions and the beaches. We love beaches and we choose M 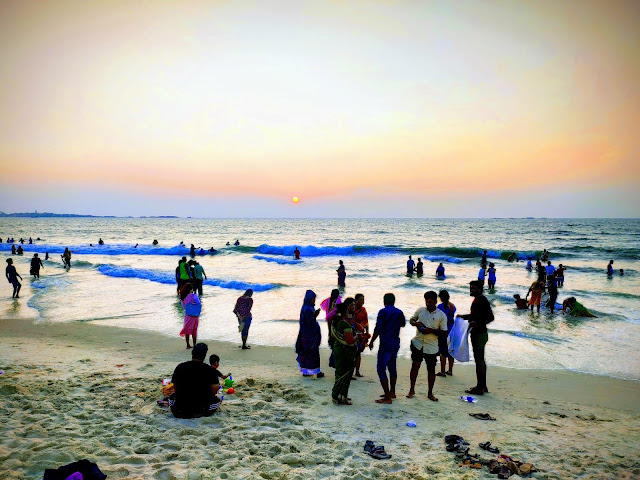 Malpe - The Wonderful Beach of Karnataka

Malpe, the very beautiful beach of Karnataka is a great place to visit for any beach lover. I visited Malpe Beach twice, one in 2011 and latest in 2020. In this 9 year I can see lot of changes in Malpe Beach. Malpe is located at Upupi district of Karnataka. It is 60 km from Mangalore and 400 km from Bangalore. This time I went to Mangalore from Bangalore by flight and from Mangalore I booked prepaid taxi to reach Malpe Beach. You can go by car or bus till Upupi as well. There are now few hotels and resorts and I choose Paradise Isle Report. The location of the resort is excellent and just opposite to the beach. We reached the resort at 12.30. Finished lunch and checked in to room and came to the beach around 2.30. It was bit hot even in January, but a nice breeze was compensating the temperature. Beach was bit crowded and many tourists, school students, families came to the beach to enjoy the day. There is dedicated parking area for car, bus and all. There a 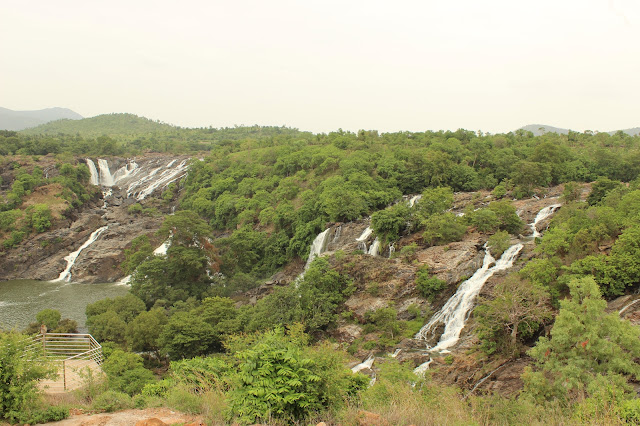